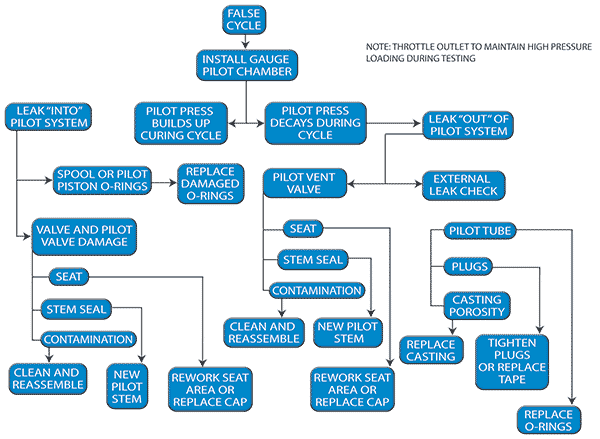 SYMPTOMS:
a. Unexpectedly rapid cycling under load.
b. Back pressure does not have significant effect on cycle rate.
c. Failure to build pressure as expected from cycle rate.

THEORY OF CAUSE:
The reasons for "false cycling" of the air cycling valves are either "LEAKAGE INTO" OR "LEAKAGE OUT OF" the pilot system. The pilot system operates with a constant pressure on the annular area at the small end of the spool and an alternating pressurizing and venting of the large end of the spool.
When the large end of the spool is vented (pumping stroke), if there is any leakage "into" the pilot system, it will cause the spool to shift to the other position. This will result in the pump not completing its stroke and "re-cycling" to the pilot vent cap to "vent" the pilot for another pump stroke. The pump, therefore, does not put out as much flow during each partial cycle.
When the pilot chamber is pressurized (suction stroke), and there is a leak "out" of the pilot system, the pump does not complete its stroke and it returns to the lower cap to get re-pressurized. This will also result in lower fluid flow.
If the leakage is severe, the cycling can be extremely rapid in both cases. This will definitely affect the service life of the pump and seals.

TROUBLE SHOOTING METHODS:
a. The first thing to do if "false cycling" is suspected, is to install a small pressure gage (0-180 psig) into the pilot chamber to monitor the pressure during cycling. (This is accessed by removing the 1/2 inch pipe plug at the large end of the cycling valve and installing a gage with a pipe bushing. Be sure that there is no leakage at the connection, since that can "cause" the problem which is being diagnosed).

b. With the pump outlet severely restricted, but not shut off, cycle the pump slowly using a "speed control valve" on the air drive supply and monitor pilot pressure. The pilot pressure should increase rapidly when the piston contacts the pilot fill valve and maintain a relatively constant value until it contacts the pilot vent valve at the opposite air cap. Note that the pilot chamber pressure during cycling will vary from "more than half of the drive pressure" to "less than half of the drive pressure. It will never be completely vented or completely pressurized. This is because it only takes in enough pressure or vents enough pressure to unbalance forces and shift spool position. Once the spool has shifted, the piston moves away from the pilot valve stem, and no further pressure changes should occur.
B-5 If the pressure increases or decreases significantly during cycling, then note whether there is a periodic venting at the vent port on the pilot vent end cap. If there is no venting, then the leakage is "out" of the system (external) and the stroking is incomplete at the valve cap end before turnaround. If there is cyclic venting at the pilot vent port, then the leakage must be "into" the pilot system by an internal leak, and the pump is making incomplete cycle at the pilot vent end cap.

c. If the leakage is determined to be "external", then use bubble soap to determine its location. It could be an "O" ring seal or casting porosity. Gross leakage to cause very rapid cycling is usually caused by a damaged "O" ring. It is also possible that the pilot valve may be leaking due to seat damage, contamination, or stem seal damage.

d. If the leakage is "internal", it may be caused by contamination or damage to the pilot stem seal on the valve end cap, or damage to the seat in the cap. It is also possible that the "O" rings on the large end of the cycling spool may be damaged, and permit drive air pressure to bleed into the pilot chamber.